Wicked is a timeless theater masterpiece that has quickly risen up to become one of Broadway’s hallmark productions.

Written by Winnie Holzman with music and lyrics by Stephen Schwartz, the play is an alternative telling of The Wizard of Oz based on a 1995 novel by Gregory Maguire.

The production debuted on Broadway in 2003 to glowing critical acclaim and an immediate and passionate group of fans.

Wicked is one of top ten longest running shows on Broadway and has won multiple Tony Awards since its debut.

The show is visually stunning and gratifyingly family friendly, so it’s no wonder that Wicked has won fans of all ages and backgrounds over its decade and a half on stages around the world.

The show is set in Oz long before Dorothy turns out, focusing instead on Elphaba (who goes on to become the Wicked Witch of the West) and Galinda (before she turns into Glinda the Good Witch).

The two girls are friends and rivals, fighting over a shared love interest and struggling to get to grips with their differing personalities and opinions. Wicked charts Elphaba from her innocent green-skinned childhood to her fall from grace and so-called “wicked” adulthood, and similarly shows us another side of Galinda as a spoiled little rich girl. Even the Wizard of Oz himself gets a makeover in Wicked, allowing audiences to see a different side of the mysterious magic-maker.

The story is touching and clever, offering another side to the already compelling story of Dorothy’s journey into Oz.

Wicked offers moving musical numbers like “Defying Gravity” and “Popular” alongside its fascinating storyline. The show is a poignant and captivating reminder that there are always two sides to every story.

Wicked Broadway Musical in NYC: All Information, Schedule, and Tickets. 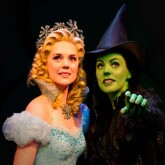 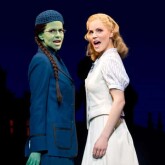