In the tradition of performance pieces that rely on creating an audio-visual spectacle rather than a storyline, Stomp fits in perfectly. However, the show goes beyond the bounds of seemingly similar productions like Blue Man Group and Gazillion Bubble Show to offer something truly unique.

Created by Luke Cresswell and Steve McNicholas, Stomp combines music, dance, and comedy to produce an unforgettable evening of entertainment. The show has been riotously successful since it first opened in England in 1991 and it shows no signs of slowing down or losing energy.

The instruments used in Stomp are created from odd household objects – plastic bags, trash cans, old lighters, and even the kitchen sink. These random items are brought together to create a vortex of rhythm and energy that grabs the audience and becomes, at times, almost transformative.

The talented performers work with these ordinary objects to bring them to life, showing that simple things can be transformed into something truly special in the right hands. Moreover, the performers’ poise combines with the stomping, heaving music to form a visual spectacle. Their grace inhabits the choreography and allows audiences to be swept away in the exhibition onstage, which is perhaps why Stomp is described as such an enjoyable and enthralling piece of theater. The fast-paced production manages to take the mundane and make it magical.

Adults, teenagers, and children (as long as they aren’t too young) will all be enraptured by the electrifying sounds and movements on stage, so Stomp is also suitable for families seeking an unconventional day out. 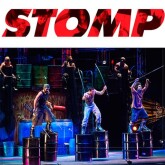 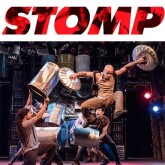