The Lion King has been a beloved audience-pleaser since its 1994 Disney film release. The iconic story, loosely based on Shakespeare’s Hamlet and set with astounding success in the African savanna, is a heart-warming tale of familial love, loss, and responsibility.

Indeed, the Broadway adaptation of The Lion King has won fans all over the world and won a multitude of international honors including several Tony Awards.

This visually spectacular production of the tale is family-friendly, combining energetic choreography, uplifting musical numbers, and inventive costumes that combine outfitting and puppetry.

Certainly, adults and children of all ages will be captivated by this breath-taking performance.

The story is based around happy lion cub Simba, an excitable kid who will grow up to rule the savanna. That is, until his loving father, Mufasa, is murdered by the evil lion Scar.

Simba leaves his homeland behind, fleeing from Scar and finding new friends like rambunctious meerkat and warthog pals Timon and Pumba. Simba grows up, learns some hilarious lessons, and gets on with his new life far away from his home pride. When the Pride Lands are threatened, however, Simba finds himself on a homeward journey to protect the place he was born to rule.

The Lion King is touching but never schmaltzy, pulled along with energy by the buoyant choreography and humorous moments.

The tale offers lessons to adults and kids about growing up and taking responsibility, interspersed by musical numbers like “I Just Can’t-Wait To Be King” and “Hakuna Matata”. The elaborate costuming and production design add a level of visual intensity that will leave audiences awed.

As the musical that has it all, it really is no mystery why The Lion King is so popular on Broadway. 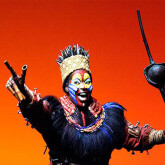 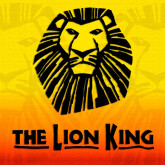 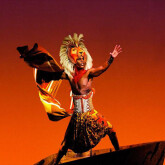