It’s been in the works for a long time, but finally, the long-awaited musical starring a gigantic animatronic ape is ready to hit the boards of the Great White Way.

Yes, King Kong is in the house and he is more than ready to climb to the heights of stardom, if not to the top of the Empire State Building.

You may have heard rumors that the big gorilla was going to take to the stage last year, but a less than spectacular outing in Australia in 2013 persuaded those involved to re-think and re-write the whole production, and the new incarnation seems promising.

Jack Thorne, the playwright responsible for the smash hit “Harry Potter and the Cursed Child,” is part of the creative team that is to bring the big guy to the stage.

Director and choreographer Drew McOnie (“Strictly Ballroom”) has joined forces with the Australian special effects geniuses of Global Creatures and producer Roy Furman of “Hello Dolly” fame to bring the monstrous production together.

The music is written by composer Marius de Vies (“Moulin Rouge” and “La La Land”) and there will be songs provided by Eddie Perfect, who also wrote music for the “Strictly Ballroom” musical. The old production featured songs by Sarah McLachlan and Massive Attack’s 3D.

There is some Kong grunting provided by an actor in real-time, but it was decided that having a 20-foot gorilla belting out show tunes would make even the most enthusiastic audience a bit skeptical.

Much of the score is lyric-free, allowing the actors and the great ape to move and dance in time with the music.

Kong is quite agile, thanks to the skills of the team that also created the enormous creatures for arena shows like “Walking With Dinosaurs.”

Most recently, the big fellow had a cinematic hit with “Kong: Skull Island,” so it’s natural to think that this version if correctly presented, will be equally successful.

Producers are banking on the character of heroine Ann Darrow to capture the hearts and minds of the audiences in this day of empowering female protagonists such as “Wonder Woman.” 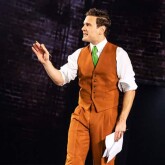 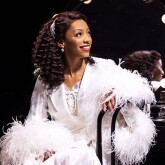 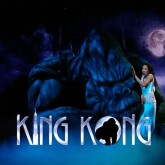