Hamilton became an immediate Broadway and media success when it launched last year. Perhaps the first musical to really crack out onto all corners of the internet, Hamilton is a unique mash-up of rap music and US history.

Strangely, the combination works to create a fascinating, funny, and riveting musical. Hamilton is written by new mainstream celebrity Lin-Manuel Miranda, who also starred in the main role until recently.

Based on the life story of Alexander Hamilton, one of America’s Founding Fathers, Hamilton is packed with verve, vigor, and fantastic music.

As unlikely as it seemed when it debuted on Broadway, Hamilton manages to bring American history to life in song and music and audiences can’t get enough of it. 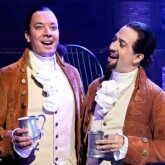 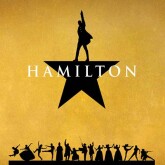 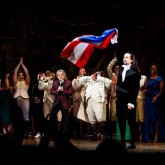 Alexander Hamilton came to New York as an orphan raised in the Caribbean.
He served as secretary to General Washington and authored many of the Federalist Papers defending the Constitution, as well as founding the New York Post and making time to be unfaithful to his wife. Hamilton had a long-standing feud with Vice President Aaron Burr and their rivalry underscores much of the musical.

This modern retelling is told almost entirely through rap music. Cleverly, this lends the story a modern tone that makes it accessible to older and younger audiences. The score is catchy, intelligent, and oddly fitting for such a historical backdrop. The switchover of several main cast members offers the musical some fresh but no less talented blood.

This Broadway production is notable for its handling of race and the fact that it contains a predominantly non-white cast.

On the whole, Hamilton is a thoroughly modern musical based on a wholly archaic tale. Miranda has created something ground-breaking with Hamilton, opening up the possibility of more off-the-wall productions to come.

The musical will surely continue to win fans for the duration of its run, both online and in theaters.