Home » Shows » Come From Away Musical

COME FROM AWAY BROADWAY

Come From Away is the emblematic story of the generous spirit of the citizens of Gander, Newfoundland, Canada, on a fateful day now only known as “9/11.” 38 airplanes carrying a total of 6,579 passengers landed in a town of 7,000.

For five days, the citizens welcomed, fed, entertained and comforted stranded passengers, many of them Americans. While it seems an unlikely subject for a musical, it has taken Broadway by storm and touched the hearts and minds of all who have seen it on stage.

Despite the serious nature of the 9/11 history, somehow Come From Away manages to lift spirits and hearts and provide food for thought for those leaving the theater.

COME FROM AWAY TICKETS

Select Tickets to Broadway’s hit musical Come From Away at the Gerald Schoenfeld Theater in New York City!

COME FROM AWAY SHOWTIMES

COME FROM AWAY VIDEO 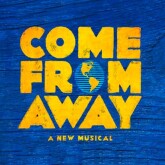 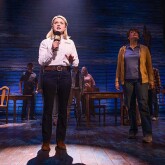 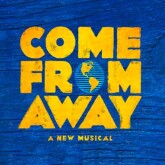 The brainchild of husband and wife team Irene Sankoff and David Hein, who make their home in Toronto, Come From Away began earning awards almost from the moment the actors came onto the Broadway stage. It all began with weeks of research, collecting stories in Gander, where Irene picked up a pincushion embroidered with a colorful Earth globe and the saying “Come From Away,” which is Newfoundlander-speak for a tourist–one who has come from far away. After creating the play, the couple staged it in a series of small theaters in the United States, performing it also for benefits and charities, as well as a couple of shows in Gander. The show became so big in Toronto that people camped out overnight for its final performances. Still, it wasn’t easy getting producers to accept the idea that 9/11 could be the subject of a Broadway musical, much less one with jokes. But Come From Away has brought home the big-heartedness of Newfoundland and placed it squarely on the stage, to great success.

Directed by Christopher Ashley, the stage director of the La Jolla Playhouse, where Come From Away came into its first taste of fame, has now made his mark on the Great White Way and he directs with a sure hand. It’s not his first time out, having a few Broadway shows under his belt, including Xanadu, All Shook Up, and Rocky Horror Picture Show, the last of which earned him a Tony. Ashley’s direction is complemented by the choreography and staging by Kelly Devine, which is apt, tight, and mercifully short on “jazz hands.”

The talents of Sankoff and Hein have supplied the book, music, and lyrics for Come From Away, and the songs will leave theatergoers with a surprisingly uplifted frame of mind. From the Newfoundlanders introduction of “Welcome to the Rock,” and the folky “Blanket and Bedding” to the absolutely comic drinking songs of “In the Bar” and “Screech In,” there are plenty of hummable tunes that stick in the ear instead of the craw. Singing and dancing stars include Petrina Bromley–a Newfoundlander–and Geno Carr who, as do the other ten cast members, take on multiple roles in this production and they make the transitions seamlessly.