Beautiful: The Carole King Musical takes an insightful look at Carole King’s life alongside reproductions of some of her greatest hits. For five years, Beautiful, the Tony and Grammy Award-winning Carole King musical.

Carole King wrote and sung some of pop’s most famous tracks, and this musical honors her in true, beautiful form.

The musical has been warmly received on Broadway, earning a host of glowing reviews from critics and audiences.

With a strong cast of actors and musicians, Beautiful is a memorable and touching retelling of King’s tumultuous life.

The musicals follow King’s career from its natural beginnings in Brooklyn, where King was pregnant seventeen-year-old married to Gerry Goffin, an older lyricist. It was during this time that King penned her first big success, the song “Will You Love Me Tomorrow”.

As the 1960s begun, King found herself propelled towards success and producing some truly classic hits with Goffin.

She and Goffin also formed a long-term friendship with Barry Mann and Cynthia Weil, also songwriters. When King decided to strike out on her own and produced a solo album, Tapestry, she created a musical best seller.

The sounds of the sixties are a familiar fixture on Broadway but Beautiful presents them in a particularly loving and well-recreated manner. Moreover, while the show skirts around Goffin’s drug use, it portrays his nervous breakdown and unfaithfulness to King.

Beautiful is appropriate for the entire family, but very young children won’t be interested in this 1950s-era biography.
The show is best for pop music lovers age 10 and up. 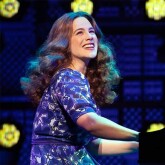 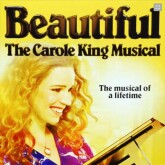 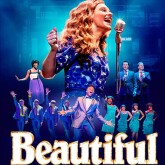