Aladdin Broadway musical offers a glorious visual spectacle with an exciting story, so it’s a safe bet for Disney fans.

Aladdin was a much-loved 1992 Disney film and has attracted fans of all ages since its release. Its Broadway opening has been received positively, with critical and audience fans fawning over the musical.

The Broadway production opened at the New Amsterdam Theatre on March 20, 2014.

The upbeat and glittering production is perfectly family friendly while providing a fun visual spectacle.

The story of a gusty ne’er-do-well and his beautiful princess love interest is as compelling on stage as it is on screen.

Broadway’s musical tradition has been transformed into Fantasyland with the elaborate production of Disney’s Aladdin and there is no going back.

The story follows Jasmine, a middle-eastern princess with a demanding father who wants her to marry a royal. Meanwhile, his evil confidante, Jafar, plots to take over the throne.

The plot ramps up when Jasmine sneaks out of the palace and meets Aladdin, a street urchin with a heart of gold.

Aladdin is sentenced to death for consorting with the princess but is promised release if he fetches a magical lamp.

However, it’s not quite so simple as a boisterous genie appears from inside the lamp and grants Aladdin’s wish to become Prince Ali.

Can he find a way to win over Jasmine and get rid of Jafar?

Gasps come from the audience when the boisterous genie appears from a lamp and transforms the humble Aladdin into the illustrious Prince Ali.
Thus the young man embarks upon his quest to win the heart of the beautiful Jasmine, all with a background of lush visuals and delightfully family-friendly songs, dances and music.

Kids who were fans of the Aladdin movie will be joyously singing along with favorite songs like “A Whole New World” and “Arabian Nights.” 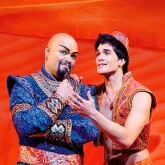 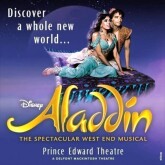 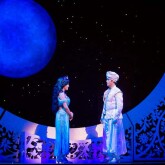 Choreographed and directed by Tony-winner Casey Nicholaw (The Book of Mormon and Something Rotten), this stunning musical version of the classic Aladdin tale delivers glamorous costumes, gorgeous sets, and dramatic lighting. There’s enough action to enthrall boys, plenty of princess beauty for the girls and sufficient professional musicality to keep the interest of even the most jaded adult theatergoer.

Much of the Aladdin magic is delivered by technology that allows things to move through the air with the help of about 45 machines working on a wired and wireless network. Even the constantly changing scenery is controlled by an invisible wizard behind the curtain. Don’t worry; you’ll never notice the wires!

There’s magic in the air – literally – when Aladdin and Princess Jasmine take to the skies on a magic carpet ride to a very happy ending. As USA Today wrote, “it’s pure Genie-us.” You might say it’s the musical you’ve always wished for and you don’t even need a magic lamp.

Adults and children will gasp when Aladdin and Jasmine take their magic carpet ride. The music and choreography are fun, offering familiar favorites like “A Whole New World” and “Arabian Nights”. Certainly, Aladdin has a lot to compete against from big Disney musicals like The Lion King. But Aladdin musical holds its own well and will delight theatergoers of all ages.